ebay.com
$275.00
See it
Last Amazon price update was: October 3, 2022 1:13 pm (Info)
× Product prices and availability are accurate as of the date/time indicated and are subject to change. Any price and availability information displayed on Amazon.com (Amazon.in, Amazon.co.uk, Amazon.de, etc) at the time of purchase will apply to the purchase of this product.
0

9.5 Total Score
Cheap, reliable, accurate, and fast. Bushnell hits all of the high notes with the BTR-1.

The Bushnell BTR-1 BDC Reticle Riflescope with Throw Down PCL (power change lever) may be the only optic, besides some back-up sights, that you'll ever need.

Bushnell is a common name in optics. From spotting scopes to rangefinders and binoculars, Bushnell knows glass. As the popularity of tactical scopes has increased, one particular design has begun to stand out on the market: the 1-4X illuminated scope. Being able to quickly adjust from what basically amounts to a red dot sight, to a long range scope capable of hitting 500 yards or more, the tactical 1-4X market has been dominated by companies like Burris, and most recently, Vortex Optics. However, Bushnell has a very compelling product in the Bushnell BTR-1 BDC, with a few key differentiators. 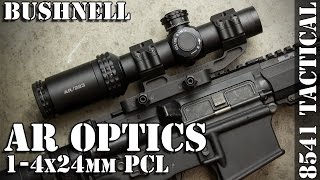 The Bushnell Optics BTR-1 is an affordable, well-made tactical scope that checks off all the right boxes. Its design and construction are solid. It’s virtually scratch proof, and the sealed O-rings and nitrogen gas filling means that it won’t cloud over or allow particles or liquids inside the housing. The multi-coated glass is crisp, clear, and allows a tremendous amount of light through. The BDC is fantastic for those of us who have 55gr and 62gr rounds in our shooting bag, and the Throw Down PCL is typically something you don’t see at this price point, and is an after-market accessory for other similar models at higher price points. The price makes it a no brain-er for those who don’t want to spend a fortune. Did we mention it has a first focal plane BDC reticle? We like it.

Bushnell recommends at least a medium-height set of O-rings to allow proper clearance for the erector cap assembly, which means this scope won’t co-witness. We recommend a set of 45-degree sights if you are the type that has to have some sort of analog backup. The turrets are taller than the competition, and are not locking, but the solid, crisp “click” means they’ll hold true in all but the most extreme situations. The BDC isn’t decipherable at 1X, but why would you need it to be?

As we mentioned earlier, this is a niche for AR tactical scopes that’s heating up. Multiple companies are putting out products to compete for the best 1-4X scope. Bushnell has competition from Burris MTAC, which can also be purchased pre-assembled, with a cantilever mount and Burris FastFire reflex sight. The base assembly is 50% more than the Bushnell BTR-1, but it has the advantage of being one of the more well-known scopes in this category. It doesn’t, however, come with anything like the BTR-1’s Throw Down PCL.

Vortex Optics has really stepped up their game here as well. The popular manufacturer of red dot sights and magnifiers recently released the Strike Eagle 1-6X tactical scope – delivering more power than either the Bushnell or the Burris models. It’s about the same price as the Burris, but delivers two more levels of magnification.

This Bushnell tactical scope hits all the right high-notes for someone looking for a cheap 1-4X scope. Cheap doesn’t mean cheaply made. We found that the construction was solid and reliable, the glass was crisp, and it let through a lot of light. The BTR-1’s BDC reticle sits on the first focal plane, so when its 1X it behaves more like a red dot, and, as you increase power, the BDC reveals itself, transforming it into a true medium range scope.

While you won’t be able to co-witness the scope, and you’ll need to get O-rings that are at least medium height, you can always get a set of 45-degree iron sights for that peace of mind backup. The Throw Down PCL is a nice touch, and something that costs extra from other manufacturers.

If you’re looking for more name recognition, or if you’re loyal to a brand, both Burris and Vortex Optics make great 1-4X(or 6X) AR scopes. But if you’re on a budget, and you don’t mind taller turrets, the Bushnell Optics FFP Illuminated BTR-1 BDC Reticle Riflescope with Target Turrets and Throw Down PCL, 1-4x 24mm tactical scope should be on your short list of optics for just about any semi-automatic rifle.

Related Articles
We will be happy to hear your thoughts

Tactical Magnified Optics Telescopes (or 'scopes for short) began appearing on rifles during the ...

With 56mm multi-coated lenses, the NightForce Rifle Scope provides a superior resolution which ...